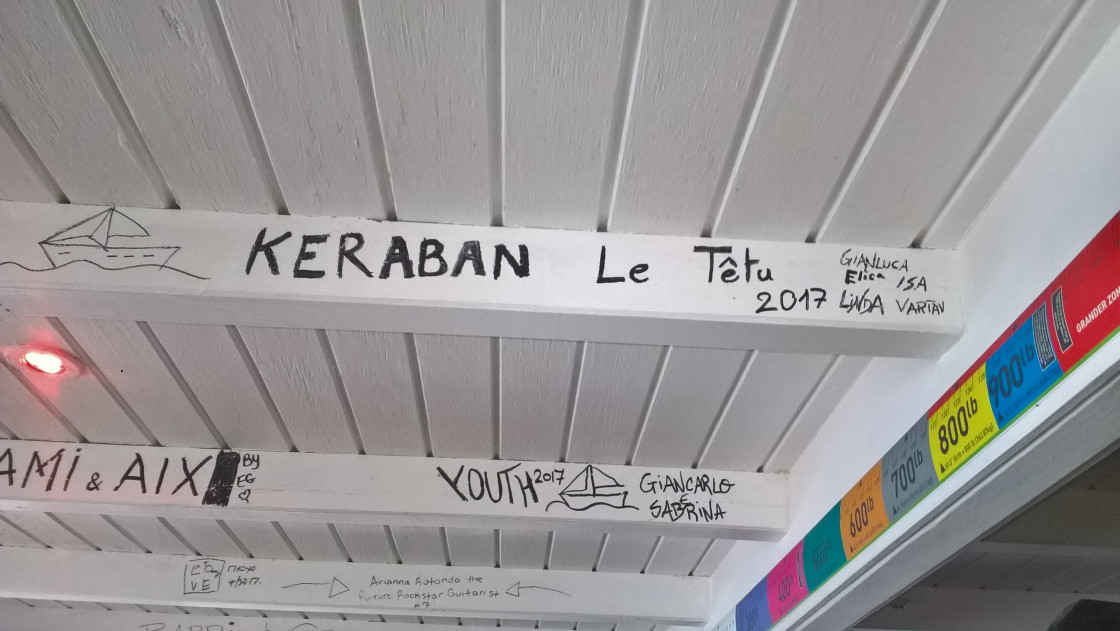 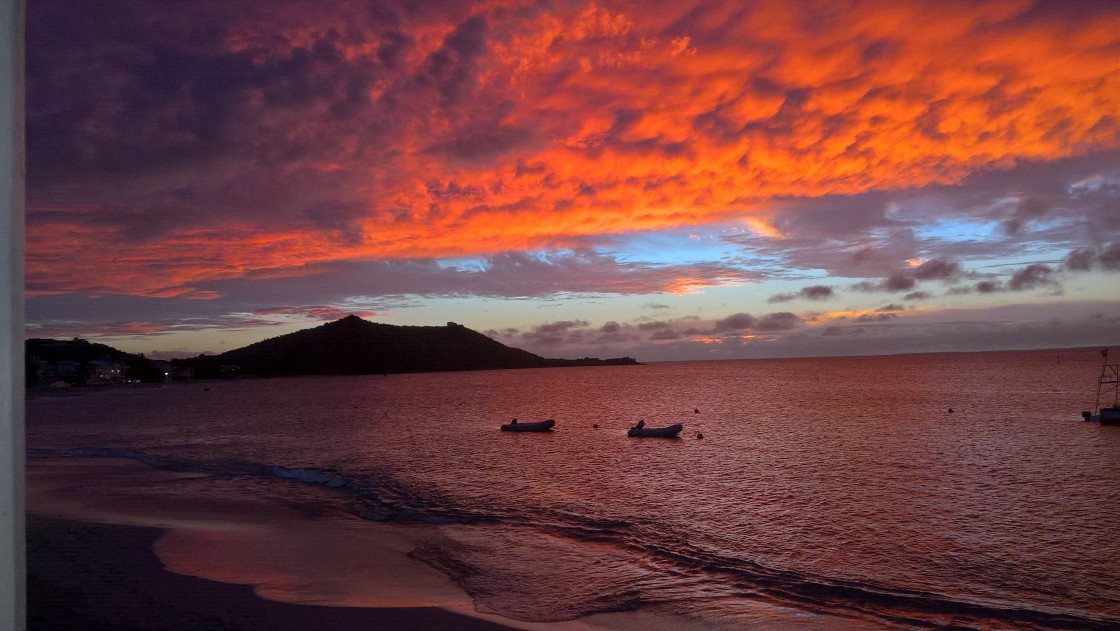 Keraban is back on the water since Wednesday 10th. André joined the prior evening, amidst one of the most intense rains, not the image he necessarily had about the place, although he was better informed than I am and knew May is the 2nd most rainy month around here. It is good to think that we met almost 20 years ago working in NY, then in Germany, have done many things together in the meantime, and now about to start an ocean passage. Who would have thought that in 1998.

The works on Keraban have been completed and on time, the entire list and some. The guys at BestBoatyard in St. Marteen, nearby Bobby’s Marina, are solid and in addition to standard work they managed to overcome the lack of some European spec parts by machining at their workshop.

Keraban slides on the water. The loss of speed is so gradual during the months that it is hard to sense, but it becomes patent with the freshly cleaned hull. The other noticeable difference is engine noise, close to nil after having repositioned the heat extractors.

In spite of a rainy forecast, the day is beautiful and we even have a nice breeze. We sail out of Grand Bay and gybe around the western tip of St. Martin towards Marigot, so nice indeed that we decided to go just a bit farther into Grande Case to enjoy the fine, fast sailing. We anchor, rush a bit to inflate the dinghy and place the outboard to head towards the dock and savor the sunset & chardonnay duo.

The next morning we have to abandon the idea of visiting Anguilla, the sky is falling on us. A boat drags the anchor as the gusts rise above 30kn (the same boat had already dragged on its anchor last time we were here) and the unlucky neighbors have no choice but to get their fenders out. We tuck inside, planning the coming days….food list, routing, night shift management, communications, etc. There is some pressure building, but not that much after all relative to the task that lies ahead. We will see in the coming days.

The crew is complete, Daniel having joined today (Saturday). We will be 3 in total.

The morning has been busy dismounting the hot water tank and fitting a new one. It is a simple job on paper, but one thing I am not is a plumber and since we did not want complications right before departure we asked for help. Having attempted a repair was a mistake, and we should have replaced it at the shipyard. Oh yes, we also got a big wave from the wake of the ferry through the stern hatches, the captain having decided that about 10m was a safe distance to pass at full speed from boats at anchor (there is no marked channel, i.e. we are free to anchor, and if there were one ships would be subject to a speed limit). Result: books and cushions drying under the sun.

With that and the crew complete we headed for Marina Fort Louis. It is simpler for the departure preparation logistics. Once secured inside, we went for the now famed “Souper Ou” with an evolved version of previous shopping lists at hand, with complex formula’s depending on the number of crew, we still remember how to use a spreadsheet.

We’ve got all the dry food, about half the beverages. The other half will be tomorrow AM (here they work on Sundays). Fresh, produce and fruit are left for the last day, possibly Monday. The total weight of food and beverages that will come onboard for a crew of 3 for the 2 week (plus 1 week safety margin) passage to the Azores is about 300Kg, excluding water tanks (250 +50 reserve). I trust part of it will last until Gibraltar or even Ibiza (where we have a tentative appointment mid June with our friend Jaro). The boat will be about 800kg lighter than on the way up here, partly because of crew / food, but a good 100kg thanks to excess chain left out of the boat at Philipsburg. With less crew, we have also been able to center the weights better.

Keraban is ready. Last minor stitches to the sails, dinghy folded, outboard engine rinsed, all tanks full, all food and beverages onboard, security & spare parts briefings, night shifts, MOB rehearsal, route briefings, etc etc. This morning (Monday 15), we had our kick off call with the land based weather router. By the looks it will be a quiet initial week, so we put the Code 0 on deck and prepare the Spi lines. As in our first entry to this diary, all very linear, time flies like sand through your fingers. We plan setting sail tomorrow morning, not after a Paella onboard Youth this evening.

We will be posting our position now and then during the crossing. See you in Horta. 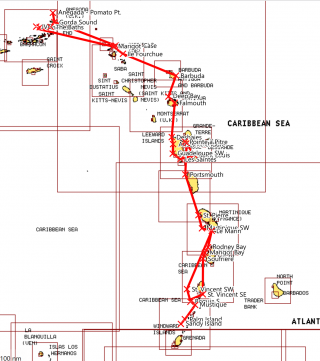